Cake! Whilst en route to a bluebell wood.

Spotted on a local building site. Not my usual typ

Sunset walk. Am determined to make the most of the 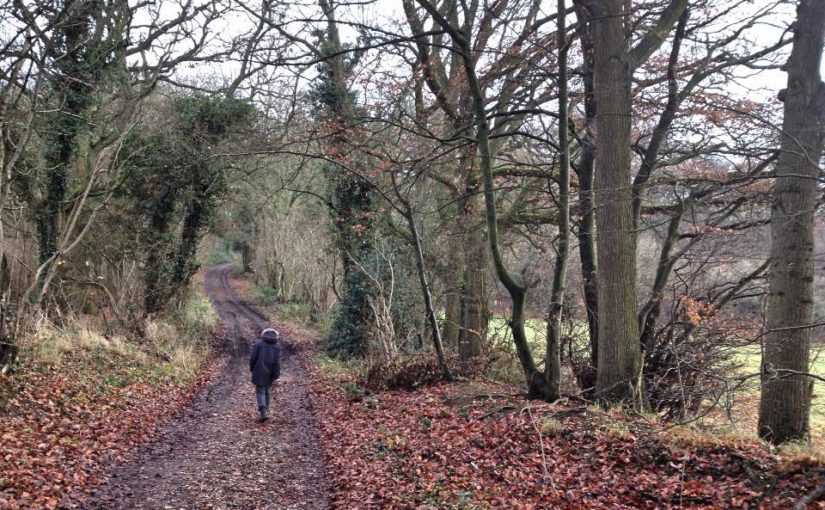 The short grey days of winter do their best to encourage hibernation. Or at least give the kids an excuse to spend all day indoors on technology. Instead I lured them out with the promise of a pub lunch. I may have forgotten to tell them about the walk afterwards but they’re old enough to realise this for themselves now.

Lunch at The Bell Inn, Aldworth

I generally prefer cafes to pubs for lunch (more chance of cake) but I make an exception for the Bell Inn in Aldworth. This tiny traditional freehouse epitomises the classic English village pub; it even has a cricket pitch out back.

Whenever we visit the pub is packed with locals, walkers and families. As you enter there’s a small serving hatch to place your order for food and drink. A room leads off to one side with several tables and a fireplace but we’ve never managed to get a seat indoors yet.

Instead, after placing our order, we retreated to the pub garden to find a seat. There aren’t many places I’d consider sitting outside in the depths of winter but this is one of them. Fortunately we had a picnic rug in the car so I popped back to get it to cover the wet benches.

The food is simple, cheap and delicious. A choice of soup, rolls or ploughmans; I opted for a cheese and onion roll. The warm buttered roll arrived with a huge chunk of cheese, half an onion and various accompaniments. I don’t drink beer but the pub’s local ale offerings are evidently excellent.

Before leaving I squeezed back through the pub to pop to the Ladies. Compared to the men’s open air option this was luxury, although the plumbing looked circa 1930s.

A circular walk from Aldworth to Ashampstead

I had bought my trusty OS map with me so put together a circular walk of sorts, taking us from Aldworth to the next village, Ashampstead, visiting their renowned churches. The area is wonderful for walking with the Ridgeway and many downland options nearby. We were short on daylight though so only had time to squeeze in a couple of miles.

St Mary’s Church is famous as the home of the Aldworth Giants, nine stone effigies of the De La Beche family. The family were local landowners in the 14th Century and were supposedly all over seven feet tall! Sadly the effigies were damaged during the Civil War so many sport broken limbs.

The church is also notable for its thousand year old yew tree. When I mentioned this to the family I was met with howls of despair. A few months earlier we had driven ‘halfway across France’ (so they say) to look at a thousand year old oak tree, which had rather underwhelmed them. The yew tree made even less of an impression than the oak. But at least we hadn’t made a special journey just to see it.

Our onward route to Ashampstead wasn’t the best. It started out well with a muddy wander through the woods. Lots of pheasant feeding stations. Along with pheasants. Always ready to cause a heart attack by unexpectedly flying out of the undergrowth.

The downside was the road walking. There aren’t many direct routes, solely using footpaths, between the two villages so we resorted to using country lanes. These were nice enough and easier walking than mud. But the drivers were making the most of the open road, whizzing by us with little space to spare. Not the relaxing walk I was hoping for.

I’m not a churchgoer so it’s pretty unusual for me to visit one church, let alone two in one day! But I’d read about the medieval wall paintings at St Clement’s Church and decided a visit was worthwhile. Probably painted by a monk in the 13th Century they were covered up in the 16th Century and only discovered again in the late 1800s when some plaster fell off the wall.

Some of the paintings were hard to make out but when you consider they’re more than 700 years old it’s an achievement they’re still there.

I was taken by the wooden bell tower too. I’m sure that when I had an I-Spy Churches book back in the 1970s, a wooden tower would have been worth a few more points than the common stone one!

With only an hour to go until dusk we didn’t hang around on the way back. Although some of the route was through woods we still had to contend with the roads and I didn’t fancy being caught out on them in decreasing light.

Walking back towards Aldworth we passed Beche Farm, once the site of the De La Beche family castle. Nothing remains these days, the only evidence of its existence being a silver seal which was dug up and donated to Reading museum. Onwards past Aldworth’s second pub, The Four Points. How does a village with only 300 inhabitants support two thriving pubs?

Back into Aldworth and the treat of some chocolate chip shortbread that I’d left in the car for our return. You didn’t really expect me to complete a walk without cake did you?

22 thoughts on “A tale of two churches and a cheese and onion roll, Aldworth, Berkshire”